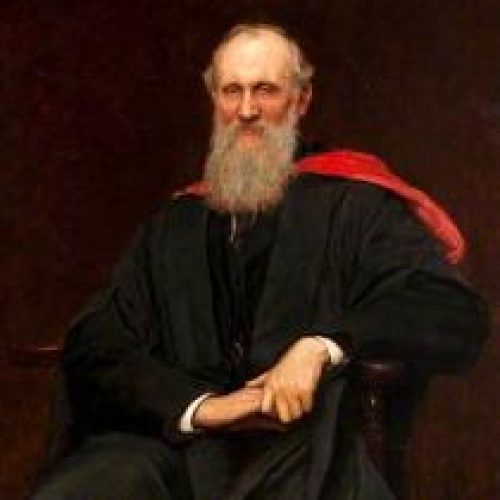 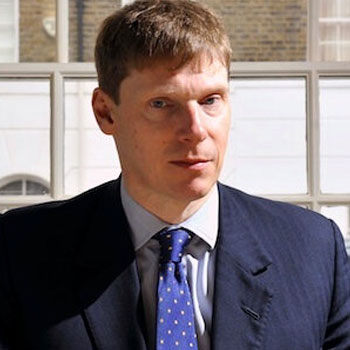 SCOTLAND’S RECORD in entrepreneurship, business and creativity was literally world leading. I recall gazing in wonder at a large tapestry at the Clyde Port Authority of the gifts that not just Scotland but Glasgow in particular, gave the world. From Kelvin (pictured) to James Watt, from Watson Watt to McAdam and many more, Scotland led the world.

Global leadership has given way to confusion, decline and short term fixes that compound the problem. While there remains centres of excellence they are too few and far between. Scotland has been slowly strangled by a centralised and highly bureaucratic state whose only response seems to be tax and spend more. It ceases to trust the people.

Today we are taxed more highly than any other part of the United Kingdom and at a higher level proportionately than at any point since the 1960’s.   The irony is despite much higher public spending and taxation outcomes are getting worse, be it in terms of education, crime or business opportunity. This cycle of centralise, control and tax must be broken.

Since the SNP came to power Scotland has failed in so many ways but perhaps most starkly is its economic failure with GDP growth of barely half the UK average (see chart below). This failure to match the UK average really matters and has cost the Scottish people some £11bn of beneficial economic activity per annum and with it £3.9bn lost tax receipts – enough to fund a housing budget twice the current level. 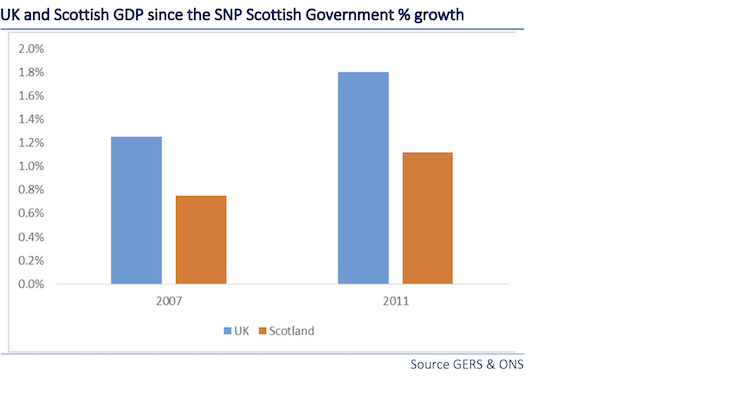 This underperformance is even more stark compared with our Australian and Canadian cousins as can be seen from the second chart below. There is absolutely no good reason for this and we must raise our sights. 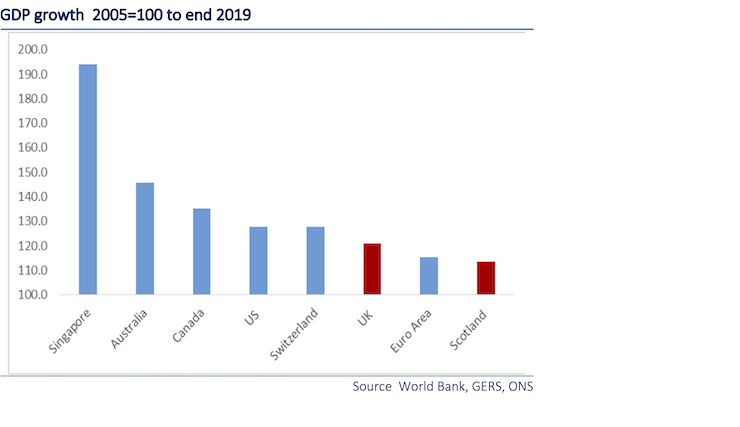 There a number of reasons for Scotland’s abject economic record in recent years but a key one has been Scotland has tested the tax and spend thesis to its limit. The Holyrood government’s response is always to increase spending, regardless of how effective that may be. Even before the pandemic Scotland has a far larger public sector, relative to the size of the economy than England, at just over 50 per cent. Today, in lockdown Scotland, that figure has risen to over 60 per cent. The wealth creating private sector has been crushed. While this may be a lockdown spike, growing the private sector is the urgent challenge if Scotland is to have any prosperous long term future.

Worse, Britain may have the longest tax code in the world but the Scottish version of it is even more complex notably with generally higher income tax and an absurdly onerous and expensive Land and Buildings Tax. These anti-growth policies have stifled the very productive private sector that ultimately pays for the NHS and a good state education.

The SNP has been the architect of this policy but Scottish Labour’s response is to tax even more. Everyone should be concerned about this, regardless of what one might earn, as it will simply drive wealth and talent away, further reducing the cake, making it all the harder to regenerate and pay for the services we would wish.

More disappointingly the supposedly free market Scottish Conservative Party has lost its self-confidence and lamely goes along with the zeitgeist. I see no proposals from them to stimulate the hard pressed private sector, just a lame acceptance of the failing status quo.

I was asked by Reform UK to devise a tax plan to grow the cake not enfeeble it. Our proposals for Scotland can be read here. Using tried and tested principles we have sought to devise a plan to lower and simplify taxes which in the medium term will raise the pedestrian growth rates that has stifled the Scottish economy. This in turn will rejuvenate the tax base and we estimate, on a five year view be fully funding.

Our proposals are UK-wide and result in a £48bn stimulus through tax cuts where all will benefit but with the modestly off benefiting proportionately the most. In a Scottish context the tax cuts are worth some £4.1bn of 2.4 per cent GDP.

It may seem counterintuitive to cut taxes when the economy is in such a lockdown induced hole but actually £48bn is twelve weeks coronavirus spending and this stimulus will raise growth from highly pedestrian medium term levels building future tax revenues.

The truth is the current UK-wide fiscal deficit is being funded largely by quantitative easing (Bank of England purchasing UK sovereign debt). Our proposal is to park the emergency coronavirus induced excess debt into a 75 year corona bond, funded by the UK central bank. Through this mechanism we would guarantee that the short term tax hit from our proposals would be plugged through marginally higher borrowing. This would be eradicated on a medium term view as the economy is stimulated and rejuvenated. Thus our proposals will not result in any reduced revenue to the Scottish Government as the shortfall will be funded by the Bank of England.

Quickly, however, tax revenues will rejuvenate via higher underlying growth. Just like accessing the Covid vaccines earlier and in greater number, this scheme is only possible because Scotland benefits from being a fully participating member of the United Kingdom with a respected and powerful central bank.

Our guiding principle is that Scottish tax payers should not be discriminated against by the Scottish Government. Taxes in Scotland will be no higher than the UK as a whole. UK-wide Reform UK would raise the threshold before any income tax is paid to £20,000 from a current £12500. We also propose that income tax is levied at 20 per cent up to £70,000 and then 40 per cent thereafter. An employee earning £20,000 per annum would thus be £1,500 better off – an effective 7.5 per cent pay rise. This money would flow back to the economy multiplying the impact.

While a UK-wide measure, we would abolish Corporation Tax on all profits below £100,000 per annum taking around 80 per cent of companies out of paying any Corporation tax at all. Small business has been decimated by the lockdown – this will help to stimulate it and help create new jobs.

And on the ineffective and depressing Scottish Land and Buildings Tax which depresses dynamic economic movement we will simply abolish it replacing it with a UK-wide Stamp Duty levied at zero under £750k, 2 per cent up to £1.5m and 4 per cent thereafter.

This is just a flavour of our fully costed proposals. Our detailed plan for the British economy can be read here.

Simply put, we will reverse the stifling increase in tax giving families and business a major boost. This will raise growth, stimulate the private sector and ultimately increase the tax take to provide a sustainable improvement to the public sector. We will break the cycle of decline by increasing the cake.

From Edinburgh, now living in the Scottish Borders, Ewen Stewart is a City economist whose career has spanned over 30 years. He is director of Global Britain and a co-founder of Brexit-Watch.org. He is the author of Reform UK Scotland’s economic and tax plans and the Reform UK alternative budget.

Ewen Stewart is a City Economist whose career has spanned over 30 years. His consultancy Walbrook Economics specialises in the interaction of macroeconomics, politics and capital markets and advises major pension funds, asset managers and hedge funds. He is Director of the think tank Global Britain and his work is widely published in economics and political journals.

The near silence of Northern Ireland’s centenary celebrations

Why the Lib Dems failed in the Scottish elections

A sunny optimistic Boris could have done better than dour Dougie

Just how contemptible can the Lib Dems be?

Election analysis: How did Covid-19 policy impact the outcomes?

One referendum that could prove universally popular…

How to vote tactically to get #SNPOut